The Story of Floyd and Cool-B

The Story of Floyd and Cool-B

In their own unique way, pets form their own relationship with each other. What happens when one pet passes away? Considering pets and grief, do animals have their own way of grieving the loss of each other? Working with pets and families as we do, we certainly see and witnessed many instances where they obviously (and in their own way) show how they search for the fellow pet that is no longer there to play – and while we’ve seen it, it’s really hard to convey what that looks like unless you see the pet.

A Game Developer Explores the Grief of Pets

But then we encountered this story – and it’s pretty incredible. David is a video game developer in the area, and he’s quite accomplished (check out his web site  at solanimus.com and you’ll see what I mean). He relayed to us the story behind the first game he ever developed, and it’s incredible:

When I was much younger, we adopted two cats that had been together their entire lives, Cool-B and Floyd. Unfortunately, Floyd got very sick… he passed away. After this, Cool-B of course changed dramatically. He would roam the house, crying for Floyd, searching for him every night. 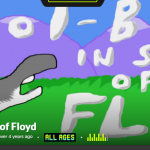 Seeing this (along with his own grief over losing Floyd), David developed a video game that told the story of Cool-B on a journey looking for his buddy Floyd. Cool-B in Search of Floyd was the first game he developed, and helped launch his career and his company – but even more, it allowed David to tell the story of loss that his pet was experiencing.

As this was his first game (as well as several years old by now), David himself will tell you that the graphics, music, and gameplay of his first game were indicative of a young developer (his current games are pretty amazing) – but check it out. Spoiler alert – if you get to the end of the game (where Floyd finds Cool-B at the foot of the Rainbow Bridge), you get to see pictures of the actual Floyd and Cool-B.

About the Author: Hal Atkins

Companah is a small business founded in Central North Carolina, owned and operated by Hal and Shannon Atkins. Caring for others, living and loving the natural beauty of our state, and having careers in science and technology are the reasons they have built this practice. Hal spent his childhood in the mountains of North Carolina enjoying the natural splendor of the Blue Ridge Mountains. Shannon spent her younger years down east on the Neuse and Pamlico Rivers. Knowing the importance of our natural environment, they are excited to bring a technology that will significantly reduce the environmental impact of traditional animal cremation methods while returning a better overall product to your family.