Growing up in the 1980s, almost every school day started the same. 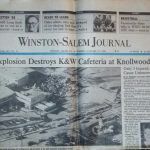 Wake up, walk in to the kitchen. Get the Cheerios out of the cabinet, milk out of the fridge. Find where the sugar bowl was put away (the same sugar bowl is used for cooking, for making that coffee that comes out of the Mr. Coffee machine taste halfway decent, and for creating the sludge of milk and sugar at the bottom of my cereal bowl). Walk down to the bottom of the driveway to get the Winston-Salem Journal. Come back, take my seat at the table.

Dad would sometimes get the comics section before me – don’t think he really read the comics, though. He liked to do the word scramble. Nevertheless, breakfast was never over until I got to read all the comics. These days, the first thing we often read over in the morning is on our phone screen. Back then, it was the thin paper and black ink of the local newspaper. The work of dozens of reporters and printers from hours before was the start of every day for folks back then.

I tried to describe this routine to my children – and before we could even get to the stage of the conversation when my teenager roll their eyes in to the back of their head, my wife and I got in to a pretty heated argument over the best 80s newspaper cartoons. The debate almost got to the “rank the best Springsteen songs” level.

I have no idea why this cartoon was in my paper, and I really don’t know who enjoyed it. Shady dude, and could never see his eyes. Always in the pub. And I still don’t know what snooker is, but he played it a lot. My guess is that some editor had a long lost relative over in Liverpool or something, and kept this strip in circulation for them.

Wow. This family. First off, the hair on Dagwood was the inspiration for Stephen King when he wrote “It”. I know this was decades ago, but the level of dumb blonde humor in this could serve as primary source in a thesis paper for a social studies group. Hardly ever read it, but I’m pretty sure I had nightmares about that hairstyle.

I mean, comic strips aren’t supposed to be a self-help series or even inspirational – but good gracious reading this strip would make me want to abandon all hope and go live in a van down by the river. Whining, complaining, and she always had those lines coming off her head. Were those tears? Hairbands not affixed properly? Arrows being shot her way?

I don’t want to be mean about this cartoon, because it is the nicest cartoon ever made. Like, nicer than Peanuts. Everyone was nice and cute. The kids always said the cute things. The Mom was always in control, and they had the nicest neighbors.

But nice is not funny. This comic strip was voted to be  1982’s Most Likely to be Cut Out and Hung on Grandma’s Refrigerator award – so it does have that going for it.

This one had humor, but not much. I did like these guys, because I remember being able to draw the characters myself. I never figured out the premise, though. Was the reference to “Id” in the name of the strip some Freudian thing? Or is it Freudian because that’s what I thought it meant?

We all have found memories of Garfield. Fat cat jokes are cute. Heck, we’ve got a cat right now that would make Garfield look like he spent a couple weeks with Bob Harper from the Biggest Loser. The humor was there, but it kinda was the same schtick over and over again.

Now we’re starting to move forward. The Far Side is, far and away, the best single-pane comic strip ever. Great humor, one that appealed to all ages. I mean, I remember buying our Dad a book of Far Side cartoons – AND HE READ THE WHOLE THING. Dry humor in the morning is always a good idea. Pretty sure this was the cartoon strip that Steven Wright read when he was growing up.

As normal as Family Circle was – The Far Side was equally oddball.

Now here’s where some folks are gonna lose it, because I know that everyone’s knee-jerk reaction is that Calvin & Hobbes was the best strip ever. I’m not saying it wasn’t good – it was. But couldn’t the parents ever figure out the whole Invisble Tiger thing? I mean, even I understood that my kids had invisible friends and that when they blamed stuff on them – they were just trying to get out of stuff.

Wow. Yes, this strip was in the comics section before it got sent to the Editorial section for being, well, an editorial. I learned more about politics from this strip than any class or textbook. So many characters, so many storylines, so many things that went waaaaayyyy over my head — but it made me feel like I was smart and cultured. 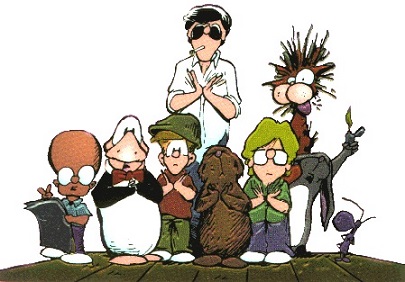 Bloom County is the pièce de ré·sis·tance of comic strips. Miss me with this one, all you lovers of the stuffed tiger – this humor, these characters, the storylines. One could pick up a collection of these strips even today and be laughing out loud just as anyone would reading this back in the 80s.

Plus, Bill the Cat. Enough said.

About the Author: Hal Atkins

Companah is a small business founded in Central North Carolina, owned and operated by Hal and Shannon Atkins. Caring for others, living and loving the natural beauty of our state, and having careers in science and technology are the reasons they have built this practice. Hal spent his childhood in the mountains of North Carolina enjoying the natural splendor of the Blue Ridge Mountains. Shannon spent her younger years down east on the Neuse and Pamlico Rivers. Knowing the importance of our natural environment, they are excited to bring a technology that will significantly reduce the environmental impact of traditional animal cremation methods while returning a better overall product to your family.